Check out this link:

Enjoy this game I made for the #WeeklyGameJam

Fly around and kill orcs, what more can you want? They will attempt to steal them and you must not let them.

Please give feedback as this is what game jams are about!

First off, epic music choice - really pumps you up for battle! I can see the potential in this game, but it just needs a few more things to make it great. If you don't mind, I have a couple of suggestions:

First, there is no incentive to stop firing. Maybe you need some kind of resources that regenerate to fill your "fire bar", requiring the player to move around and collect them. Secondly, it gets impossible at around 60,000 points, but I'm sure you know that. A leveling up system, or some kind of tower defense style turrets for you to put up could give the player more power as the game gets harder.

The last idea is to have some kind of system for powering up the eggs. Maybe allow the player to take the eggs out of the nest, which would make them more vulnerable, but allow them to grow faster. Potentially, the more you allow an egg to grow, the more powerful of a dragon you regenerate as, or something like that. Glad to see you are carrying on with it - I'll definitely play it again once it's had some more work done :)

Thank you so much for the feedback. I am interested in finishing this game up and getting it out there!

I'm glad you liked it.

One thing I would like, is a review screen with my final score. That way I can screenshot it and share.

Wish List
I wish my dragon could have a skill with a cool-down, like dash or leap.
I liked my lil dragon so much, by the way.  Could there be a secret ending someday where she escapes?

Wish list definitely looked at. I'll be updating it for sure!

It was Fun!I enjoyed playing the game. Wow

Really good fun and well made. Would be nice to see some sort of end game screen so I could check what score I got but really well done within a week.

Thank You! I plan to update it and make it much better. Please check back every once and a while! 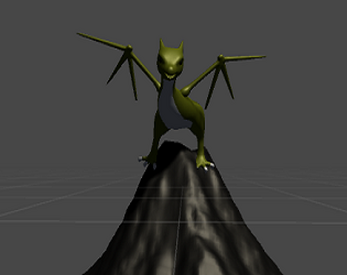